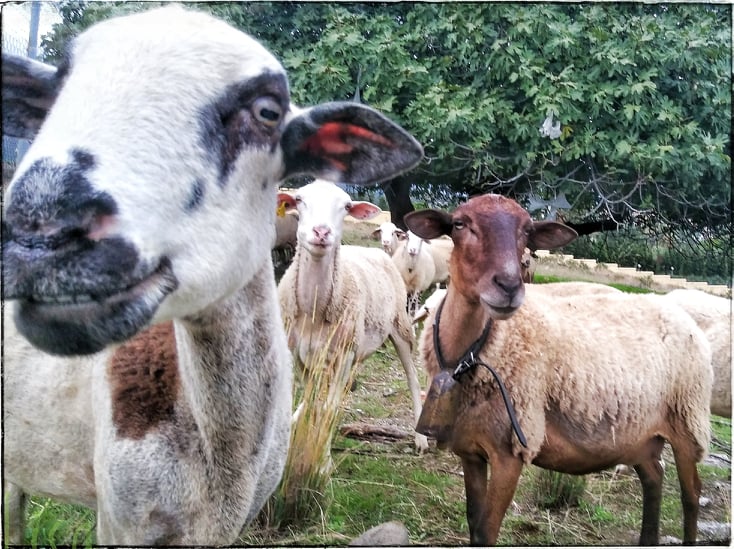 Every evening at dusk, I walk up a hill with a sack of hay, followed by a small flock of sheep. The sheep stop, I go into a sheep-house, put their hay in a manger, put out some feed, and change the water, while the sheep wait outside. Then I open the sheep-house door, and the sheep come in, each going to her preferred space. I shut the sheep up for the night, and go back down the hill.

It was quite a surprise to find that I could move sheep without the help of a sheepdog. Once the sheep decided I was ‘their’ human, it was easy to take them places, because they followed me. I persuaded them to wait outside the sheep-house by nipping in first and closing the door, until they automatically waited and didn’t try to get in before me. Making them wait allows me to set everything up without being jostled. The sheep know that if we go up to the sheep-house, they are likely to find food. Sheep also like routines, because routines make them feel safe.

Sometimes I take the sheep to the sheep-house, and then strangers come in, like the vet, or men to take them off for shearing. This makes the sheep warier for a while afterwards. If I change my jacket after an upset, they are sometimes reluctant to follow me. Sticking to the routine, including wearing the same jacket, helps them to relax and fall back into their old habits.

So, routines can be a powerful way of influencing behaviour. They make it easier to persuade animals to do what you want them to do. They work because they allow animals to achieve what they want, like eating food they like. Routines are also rewarding in themselves, because they help animals to feel safe. They know what is happening. They are not faced with uncertainty and possible threats.

Way back, I was raising two puppies. Every day, we’d go out for a run. This involved a routine of our waiting at the front door, until I told the pups ‘OK’, which meant they could move. We crossed a busy road, and of course they had to wait again until I told them it was safe to cross. The pups grew up to be calm with traffic. Cars were scary, but they knew if they waited by my side, they were safe. Then I met a littermate of one of the pups, who had never been regularly walked. I took him out a few times, and he trembled and flinched every time a car went past. Worse still, he had been taking himself for walks, and been kicked for chasing bicycles. Without a routine, life outside his home was scary, and he had developed bad habits as a way of coping with a world he did not understand.

We often mix ‘routine’ and ‘habit’ in everyday conversation. We might talk either about our breakfast routines, or our breakfast habits. And when you do something every day, it can become a habit, that you do without thinking. But there is a difference between the two, in that routines initially involve conscious planning to perform a task (like getting kids off to school) in the most efficient way possible, whereas habits involve more automatic acts of behaviour. There are different steps involved in some tasks, for example, the kids need to wash, dress, eat their breakfast, and collect any books, papers and writing equipment by a set time. Parents use different tactics, such as ensuring the kids´ clothes and schoolbags are ready the night before, and getting up before the kids, to leave the bathroom free for them, and setting out breakfast, so all the kids have to do is sit down and eat.

Routines can become habitual, but at best they are adjusted over time, for example, in line with the ability of kids to sort out their own clothes and school materials. Parents may ask kids if they have everything ready for the morning, until the kids themselves prepare all they need, and there is no need to ask them. The kids develop their own routines, and are able to develop good habits.

So routines involve planning, and are flexible. Habits are more automatic. They may be good habits, like always eating fruit for breakfast, or bad habits, like lighting a cigarette with a coffee. Habits may be hard to break, but they are not totally inflexible. Habits can change after an upset, especially if this is coupled with a minor change in routine. When the sheep see me in a different jacket after an upset, this can shake their habit of following me up the hill.

What about the sheep’s apparent routines? Each evening, they range themselves on different sides of the feeder. The ram, top-ranking ewe and her daughter on one side, and the second ranking ewe, her daughter, and an adolescent orphan on the other. The sheep also stick to a routine when they walk, one following another. There are narrow sheep-tracks crossing the land which record how they follow one another closely. But this behaviour is not conscious in the way that adult humans can consciously plan a routine. Planning involves thinking about events that aren’t happening now, but are likely to happen in the future. Developing a routine also involves organising a sequence of actions to obtain a desired result. Those are abilities that humans only acquire on maturity, and which sheep and dogs are not able to do.

Routines tend to be downplayed when people talk about training, especially when you look at trainers on TV or in videos. There’s not much to see if you are looking at a routine. Someone gets up, and lets out a pup to have a wee first thing, so the pup learns to wee in an appropriate place, rather than where the owner would rather not find a puddle. Watching an animal learn good rather than bad habits is low-key, compared with trying to correct bad habits once they have developed. Yet routines are a powerful influence on behaviour, whether you are raising young humans, or animals of other species.