About ten years ago further down my road there lived a little Cairn terrier called Fraggle. He was quite an attractive looking dog, but he was very much a little dog with a lot of attitude who would bark angrily at other dogs as he passed them on his walks. One day, while he was barking angrily at another dog, the other dog managed to break loose and attacked him. The other dog was much larger and Fraggle was badly injured. It made the front page of our local newspaper.

If only Fraggle had not upset the other dog by being so angry, the chances are high that the other dog would not have reacted at all, let alone attacked him. It’s a memory that has stayed with me. All my own dogs have been worried by other dogs barking at them. Some would bark back, my German Shepherd Stone and my Weimaraner Cindy would,  Escher will whine and pull to get away as quickly as possible, which is totally understandable after all, who of us would want to hang around another human showing a display of aggression towards us for no reason we could see or understand?

When I first qualified with the IMDT (Institute of Modern Dog training) in October 2015, while thinking up ideas for training classes, I thought of Fraggle, and I thought about some of the little dogs I’d seen in classes I was already running under my friend Denise, and considering the fairly small hall I had available, I thought it would be interesting to dedicate a class especially to these little “Napoleons”.

I structured my plan around a four week set of classes that would tackle the issues these dogs had from several directions: confidence;  mutual two-way communication between dog and owner;  basic obedience training; and environmental desensitisation, however I was really keen that I should learn as much from these dogs as I hoped that their owners would learn from me, and the little dogs most certainly gave me plenty to think about!

I would often joke in class because so often it’s true, that the tallest people seem to have the smallest dogs. Even if the humans are of slim build, in winter time, people wear a lot of heavy clothes and scarves, and carry bags. Large skirts and even coat trimmings can great create something of a canopy above a smaller dog, obscuring all view of their owners face.

It became obvious to me that very often these small dogs seemed to be cut off from communication with their owners. They couldn’t check out their owners’ faces, or much of their body language for clues as to what was happening, or what might be about to happen. And dogs can learn to read our emotions from our faces, if they are given a chance, as these studies show:

In January 2016 a new paper was released from the University of Lincoln’s School of Psychology, which looked at how dogs are able to form abstract mental representations of the emotions of both humans and other dogs using both sound and visual senses. The researchers noted that the dogs spent significantly longer looking at facial expressions which matched the emotional state of vocalisation and they concluded that that the dogs were demonstrating a recognition of emotions, and not just a learned behaviour in response to facial cues.

A further study was published in March 2016 by National Council of Science and Technology in Mexico that looked at dogs specially trained to lay awake and still in and MRI scanner while their brain activity was monitored in response to inanimate objects and human faces. The conclusion was that key areas within the dog’s brain showed a great deal of response in recognition of humans.

Evolution over hundreds of thousands of years has shaped every living creature that walks the planet. Those that failed to flourish became extinct, and those that were able to adapt in an ever changing world survived and continued to procreate. Dogs are now believed to have become a separate species from the wolf as long as 140,000 years ago. Whereas in many of its once natural habitats the wolf has become extinct, much due to persecution by humans, dogs have become one of the most prolific and widespread living species of mammals on the planet – wherever there are humans, there are dogs.

My own dogs have always been large. I’m just 5’2” and I talk to my dogs a great deal. I know for the most part, they have no idea what my words mean, but I enjoy talking to them and they seem to quite enjoy me talking to them. My current boy Escher is a large weimaraner and is particularly focused on me.  If I smile, he’ll smile and wag his tail, and invariably give me a big hug to boot. If he’s unsure what I’m saying, he’ll stare right into my face as if trying to read my words through my facial expressions.

Last year, my husband’s two year old grandson came over to visit from America. I’ve not had children myself, and I’ve not really spent much time with them in my

lifetime, but while playing with his toys with him, I noticed when I was unsure of what I was saying, he would stare right into my face, his eyes would move around my expression, and when I smiled, he did too. If I remained expressionless, he might take a bit of a step back and look less sure of himself and It occurred to me that this behaviour was very similar to my dogs’ behaviour when they were trying to understand me, and that little Darwin had yet to master any real understanding of ‘spoken’ language, so he was using my visual cues in just the same way as the dogs do.

Dogs are social animals, and it’s important for them to have two-way communication with their humans, just as it is for small humans to get feedback from the large humans who care for them. But it’s often very difficult for small dogs to get this feedback when they are out on walks. It’s fine when they share a sofa with their favourite human, and their eyes are at the same level as their favourite human’s eyes. But out on walks, they can feel very much alone, cut off, unsure of what’s happening, so it’s not surprising that they can get stressed out and overreact.

Through the evolution of dog training, there seems to have been some mistaken idea that it is wrong to pick up little dogs or comfort them in any way when they are frightened because that will ‘reinforce’ their fearfulness and make them more fearful, but this idea simply doesn’t hold true – you cannot reinforce fear, you are either fearful, unsure or not fearful. You can create fear by pairing an unpleasant association with the occurrence of an item or event. People often tell me that they are fearful of dogs because they were bitten or had a dog jump up at them at some point in time, and that this made them scared of dogs.

When working with owners of fearful dogs, I often use this analogy to help them relate to how their dogs might feel:

“Everyone is fearful of something. Most people are scared of spiders or snakes, many people are frightened of heights. Behind this door is your own greatest fear, and we are about to open it. Which of these options would make you feel better about facing your fears?

And if you chose option 2, what makes you feel that your dog might think any differently?”

(Note: Of course, putting your arm around a very frightened dog or picking it up when it is already in a state of panic is not a good idea as fear can make even the most level headed of us act unpredictably. In dealing with fear based behaviours we always seek to set up scenarios so that the dog is never so overwhelmed by fear that it cannot eat or displays fear responses.)

So it became clear that if I could improve communication between dog and owner, a lot would fall into place. The dogs’ confidence would improve, they’d be more likely to do what their owners asked, and they wouldn’t get so wound up by other dogs approaching.

How can owners of small dogs make sure they are in tune with one another when they are out on walks?

It can be very impractical to keep squatting down to smile at your dog while walking, especially if you have a bad back or are otherwise physically compromised, and of course you need your eyes to look out for where you are going, but there are a number of things you can do to help yourself and your dog to stay connected.

Consider your clothing and maybe wear a belt to secure floating tops, and tuck one side of a scarf away to give your dog better visible access to your face. Try to avoid wearing dark glasses and even make a point of smiling when you speak to your dog.

You can also pre-empt what might upset or worry your little dog and take positive actions to avoid forcing your dog into situations that might worry him. Always assume your dog may be stressed in new or unfamiliar circumstances and take a little extra time to allow them to familiarise with them. If you can pick your dog up, don’t feel bad about doing so. If he’s happy and interested to watch the world go by from the secure comfort of your arms, then maybe he might be ready to take the next step forward and approach from the ground. If he is not, then simply take a few steps back and let him watch from a distance where he is happy and relaxed.

We can use food in two ways here. If a dog is very anxious about its environment, it’s unlikely that they will accept food even if they are otherwise very greedy, so it can be a very helpful gauge as to the emotional state of your dog. If your dog is happy to eat, giving lots of very tiny treats can help your dog develop a more positive association with things that might otherwise worry him, so helping him overcome feelings of fearfulness or worry.

When in crowded places, always pick your dog up, or avoid them altogether. As well as there being a risk that someone else might not see your dog and injure them, someone could also easily not see your dog and trip over them, injuring themselves and possibly making a claim against you.

Talking with your hands and feet

Even if your face is high up above the canopy your hands fall much lower down your body and can be more readily seen by even the tiniest of dogs.  We use hand signals in all dog sports, and dogs are very adept at learning cues from hand signals. Teaching your dog to take your hands as a guide is immensely helpful for them. You can train yourself to simply pat your thigh before you step away, and use a hand signal to indicate that you are about to stop.

Thank you to Alison for helping me with this article. 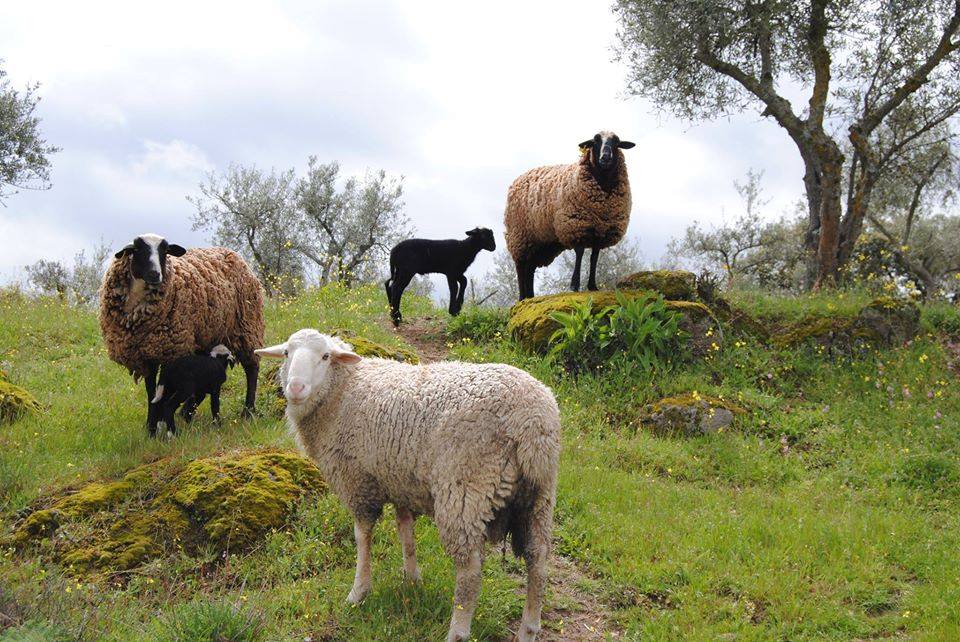